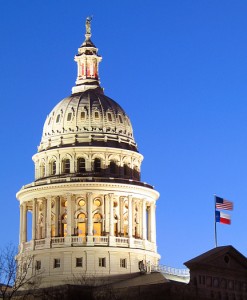 End Op filed an application with the Lost Pines Groundwater Conservation District (District) requesting operating and transport permits for 56,000 acre-feet of groundwater per year in 2007. After a District-imposed moratorium, consideration of permits resumed in 2013.

The District’s Board of Directors (Board) referred the matter to the State Office of Administrative Hearings (SOAH) but deferred the decisions on party status for AQUA and the Landowners to the SOAH administrative law judge (ALJ) (SOAH Docket No. 952-13-5210).

A preliminary hearing was held on August 12, 2013 to consider party status for the landowners (Andrew Meyer and Darwyn Hanna (Bastrop County), Betty Brown (Lee County), and landowner Environmental Stewardship (collectively Landowners). Landowners and their counsel presented evidence of their right to be represented in the contested case hearing. Landowners argued that, under state law, all landowners own the groundwater beneath their land as real property (and therefore, a valuable asset and valuable component of their overall property value). Therefore, Landowners possess absolute ownership rights to groundwater in the Simsboro aquifer and should be granted the opportunity to protest End Op’s requested pumping. (See Landowners briefs 1-5 and End Op briefs 1 & 2, Landowners as Protestants). The ALJ denied party status to Landowners and granted party status to AQUA on September 25, 2013. (see ALJ Order 3).

Upon denial of party status by the ALJ, the Landowners’ only recourse was to appeal the decision by requesting a “certified question” be sent to the Lost Pines GCD Board of Directors to answer (Landowner brief 5, ALJ Order4). LPGCD replied that the ALJ lacked authority to certify a question to the District, and that the question would contradict the District’s referral to SOAH. However, the District’s response stated: “to the extent that the ALJ finds that the party status issue should be considered,” Order No. 3 could be converted to a Proposal for Decision and the proceeding abated until the District Board issued a decision (District’s Brief 1). Aqua’s response requested that SOAH issue a Proposal for Decision and abate the hearing until such time that the party status issue was finally resolved (Aqua brief 2). ES and Landowners agreed with Aqua (Landowner brief 7) . However, End Op objected (End Op brief 3), and the ALJ declined to convert Order 3 and abate the hearing, but rather issued a Proposal for Decision denying the request for certification of the question (see ALJ Order 5).

Following Landowner’s request for a rehearing, the District issued a final order on January 19, 2015, denying party status to the Landowners (see District Order 2). As such, the Landowners had exhausted all remedies available to them through the administrative process and proceeded with an appeal in state District Court in Bastrop (See Landowners’ Affected Persons Appeal to Bastrop District Court).

In the meantime, the contested case hearing by the SOAH ALJ was held on February 11, 2014 in Bastrop, TX without Protestants’ participation. End Op and Aqua had reached an out-of-court settlement prior to the hearing, but agreed to allow the hearing to proceed and agreed not to cross-examine each other’s testimony. ALJ O’Malley did not challenge the fact the matter was no longer “contested” and essentially allowed an “uncontested case” to be heard.   This action set up an opportunity for End Op to load the official record with unchallenged, self-serving testimony that the ALJ then took at face value in rendering a decision. Much of the testimony would have been cross-examined by the Landowners had they been allowed to participate. The ALJ must base a decision on that official record, which then carries great weight in any appeal of his decision.

The Aqua settlement included 1) a reduction in the permit from 56,000 to 46,000 acre-feet per year of pumping, 2) a restriction on the amount of pumping in Bastrop County, and requiring at least 65% of the pumping to be in Lee County, where Aqua has limited production; 3) a $15,000,000 no-fault mitigation fund for Aqua, and a $3,500,000 confidential – the terms and conditions have not been released to the public – mitigation fund for landowners with wells in the Simsboro Aquifer who are able to prove End Op affected their wells. The ALJ issued a proposal for decision by the District, recommending that the District issue a full 46,000 acre-foot permit, on April 10, 2014 (see ALJ Order 10). A copy of the hearing transcript is found below (Hearing transcript 1)

The District considered the ALJ’s proposed decision and sent it back to the ALJ to develop additional evidence on beneficial use. Aqua had limited participation at the SOAH hearing on February 7, 2014 and did not take a position on the remand issues. Again, End Op was able to load the official record with unchallenged, self-serving testimony that the ALJ then took at face value in rendering a decision. A Proposal for Decision was issued February 25, 2015 (see ALJ Order 11). A copy of the hearing transcript is found below (Hearing transcript 2).