BASTROP, TX  January 4, 2018 – A state district judge in Bastrop has ruled in favor of Environmental Stewardship and three other landowners in their suit against the Lost Pines Groundwater Conservation District (District).  Judge Carson Campbell’s order rules that the District erred in denying party status and reverses the District’s decision.  The order further reverses the permits for 46,000 acre feet per year of groundwater given by the District to End Op, L.P. (now Recharge Water, L.P.) and remands the case back to the District for proceedings consistent with the Court’s decision.

Environmental Stewardship and three individual landowners (collectively, Landowners) filed an initial appeal in State District Court in Bastrop, TX on November 7, 2014 (Cause No. 29,696). They asked State Judge Carson Campbell to reverse state Administrative Law Judge Michael J. O’Malley’s (ALJ) denial of standing to the Landowners to participate in the End Op contested case hearing that was held on February 11, 2013 (Contested Case Hearing). O’Malley’s decision was adopted by the District prior to granting a 46,000 acre-feet per year permit to End Op.

BASTROP – A state district judge in Bastrop has ruled in favor of four local landowners in a dispute over permits that allow massive amounts of groundwater to be pumped from Lee and Bastrop counties.

Those permits allow Recharge Water to pump and export up to 46,000 acre-feet of water annually (approximately 15 billion gallons per year) from 14 wells in the Simsboro formation of the Carrizo-Wilcox Aquifer, for export to Hays, Travis and Williamson counties.

The judge’s ruling also revokes the permits issued by the groundwater district to Recharge Water and orders the district to conduct new proceedings on the permits that allow the four landowners to participate as parties.

“Judge Campbell’s ruling sets an important precedent for all of Texas,” said Michele Gangnes, a Lee County attorney and director of the Simsboro Aquifer Water Defense Fund. “It means groundwater districts must recognize the property rights of all landowners in their groundwater and give them a voice on pumping permits that likely will affect the groundwater under their land.”

“Pumping of that scale, especially when combined with other planned Simsboro projects, would cause huge drawdowns, affecting the wells and groundwater resources of thousands of landowners across Lee and Bastrop counties,” Gangnes said.

In a new hearing, Environmental Stewardship also would present evidence that the pumping would have negative impacts on the rivers, streams and springs that depend on groundwater. “Our objective is to protect and sustainably manage the Colorado River, its tributaries and our aquifers, through monitoring and practices based on good science,” said Steve Box, Executive Director of Environmental Stewardship.

”While the district may side with End Op and appeal Judge Campbell’s ruling to a state court of appeals,” said Ernest Bogart of Elgin, one of the landowners’ attorneys, “we hope the district will accept this ruling that will allow the district’s constituents and all Texans to protect their property and water rights.”

During a hearing before Judge Campbell on Oct. 18, attorneys for the groundwater district and Recharge Water argued that the landowners had no right to be parties because none of them had wells that were producing water from the Simsboro formation.

“The judge’s ruling affirms our position that whether you have a well or not is irrelevant – your groundwater resources would be impacted by these pumping permits and you as a landowner have the right to be heard,” Gangnes said.

SAWDF was formed in 2016 by veterans of several groups, including Neighbors for Neighbors, who have battled for almost two decades to protect the region’s groundwater. SAWDF, a 501(c)(3) organization, has focused its current fundraising campaign on supporting the landowners’ case.

HISTORY of the Case: 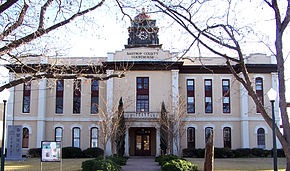 Prior to Aqua’s contested case hearing with End Op, Aqua reached a settlement with End Op that should have made the hearing unnecessary. Instead, the ALJ allowed End Op to create a self-serving official record without any objections. When a hearing is held with Landowners as a party, the Landowners’ case — and the official record — will not be restricted or limited by Aqua and End Op’s settlement agreement that preceded the (sham) Contested Case Hearing. The Landowners will dispute End Op’s uncontested evidence on which Judge O’Malley based his recommendation that Lost Pines should grant the full 46,000 ac-ft per year permit. His denial of party status to Landowners, the issues that came before him in the Contested Case Hearing, and his handling of those issues have now been reversed by Judge Campbell’s final judgement order.

The District’s contention that Landowners must demonstrate use of the aquifer and own wells in the aquifer that End Op intends to pump — the Simsboro — is contrary to the fundamental nature of the property interest they hold and contrary to their interest in conserving groundwater.   Under state law, all landowners own the groundwater beneath their land as real property — and therefore, a valuable asset and valuable component of their overall property value. If there are multiple aquifers below their land, or multiple formations of a single aquifer, the landowner owns the water in each aquifer or formation, whether or not the landowner is currently producing any groundwater. Therefore, Landowners in the End Op case possess absolute ownership rights to groundwater in the Simsboro aquifer. That aquifer is a common pool that End Op seeks to draw from. Landowners are entitled to conserve their fair share of groundwater, to protect their rights to a fair share of that pool, and they are entitled to protect themselves against damage to their groundwater and to the common pool that is the Simsboro aquifer. End Op and all other pumpers in the aquifer have a responsibility to all landowners over the pool to protect the pool for other users.

Landowners contended that the District’s decision to deny them the right to challenge End Op’s application was premised on an analysis that improperly failed to recognize the significance of the Landowners’ absolute ownership of the groundwater beneath their property. Landowners also argued that their interests were distinguishable from the interests of the general public, but the ALJ disagreed asserting a landowner must have an active well in the target aquifer to gain party status. (See below Landowners’ Initial Brief, ALJ Order #3, and District’s Order denying Status).

Landowners cited the Texas Supreme Court’s 2012 decision in Edwards Aquifer Authority v. Day where the Court applied oil and gas law to resolve a number of groundwater issues, including ownership in place. The Supreme Court recognized that rights to groundwater under a landowner’s land are akin to the ownership of oil and gas resources. The Day court noted that landowners have the same right to exclude others from groundwater beneath their property, excepting ordinary drainage, as they do concerning oil and gas. (See EAA v. Day).

Additionally, as with oil and gas, landowner rights include a reasonable opportunity to conserve in the near-term and produce a fair share of groundwater in place in the future.  Further, a landowner has privilege against other landowners in the common pool to take groundwater by lawful operation. Further, each landowner has duties not to exercise his/her rights in a way that injures the common source of supply (in this case, the Simsboro and communicating aquifers), and each owner has rights that other landowners not exercise their privileges of taking in such a way as to injure the common aquifer.

Notably, this regulatory allocation of the common resource (aquifer) plays an important role in the regulation of groundwater as well. The Day court recognized that some landowners wish to produce oil and gas to the limit, while others desire to keep their oil and gas in the ground and develop it in lesser quantities. In the oil and gas context, it is the Railroad Commission that serves as the expert to equitably balance the interests of different landowners.   In the groundwater context, it is the role of groundwater districts to serve as experts, resolve the conflict of interests between not only landowners who want to product the groundwater they own “to the limit” versus other landowners who wish to keep their groundwater in the ground, but also non-commercial uses, sustainability, and environmental considerations.

Landowners, out of an abundance of caution in legal procedure, filed multiple cases that were consolidated under Cause No. 29,696 on May 25, 2016 (see District Judge’s Order #1). The filings also raised a question of jurisdiction which Landowners and Defendants agreed to abate until the District has made a final ruling on End Op’s permit application (see District Judge’s Order #2). The appeal remained pending until the District acted on End Op’s permit on September 21, 2016 (See Districts Order Approving Permits). Prior to Lost Pines making its final decision on End Op’s permit application, the District held a meeting on the permits on June 15, 2016, and received written comments until July 13, 2016.   Environmental Stewardship provided oral comments at the District meeting and written comments detailing our concerns with the permit application and the impacts on the Colorado River and the Carrizo-Wilcox Aquifer Group. (See Environmental Stewardship’s comments to Lost Pine on the impact of the requested permits on the Colorado River and Carrizo-Wilcox Aquifer Group (2016)).

Subsequent to Landowner, District, and End Op’s filings, the Texas Supreme Court ruled on May 27, 2016 in the case of Coyote Lake Ranch, LLC (Petitioner) v. The City of Lubbock (Respondent) finding that it is appropriate for other aspects of oil and gas law to be applied to groundwater. In this case the Court found that the “accommodation doctrine” of oil and gas law extends to groundwater estates.   In so doing, and having applied oil and gas law to yet another groundwater case, the Texas Supreme Court has further confirmed that it is appropriate to apply oil and gas laws and principles as has been done by the Landowner’s in their Initial Brief.

Upon the District’s action to approve End Op’s (now Recharge Water, L.P.) operating and transport permits, Landowners motioned on September 27, 2016 for a rehearing of both the denial of party status and the approval of the operating and transport permits, and as an alternative, requested written findings of facts and conclusions of law to further exhaust administrative remedies before Lost Pines Groundwater Conservation District. In its motion, Landowners assert that the District erred in granting End Op’s permits. Landowners’ motion asserts that 1) granting of the requested authorizations was the product of the District’s erroneous decision to deny Landowners’ hearing requests, 2) granting the requested permits results in a violation of the applicable desired future conditions, 3) that the District failed to consider whether granting of the permit impacts existing groundwater or surface water resources or existing permit holders, and 4) the permits provide insufficient mitigation measures. Items 2 and 3 above lay out Environmental Stewardship’s arguments regarding environmental impact on the Colorado River and other aquifers that communicate with the Simsboro aquifer. (See Landowners’ Motion to Lost Pines for Rehearing or Findings & Conclusions).

Upon failure of the District to grant the Landowner’s motion for rehearing, having exhausted all administrative remedies with the District, Landowners’ returned to 21st Judicial District Court on November 4, 2016 with a petition for judicial review in Bastrop County. (See below Landowners’ Petition for Judicial Review (2016).