OUR GOAL:  Protect the Land and Water of the Colorado River Basin and Texas Coast

Our goal is to protect the natural land and waters of Central Texas and the Gulf Coast by advocating for protecting, conserving , restoring and enhancing the ecological functions of rivers and their associated groundwater, watershed bays and estuaries in order to optimize water available for beneficial human and environmental uses throughout the basin. To do this we gather and use scientific information to advocate for restoring and sustaining ecological services provided by environmental systems, provide environmental education and outreach to the public regarding the challenges that face the region, and seek solutions to the challenges facing us in the decades ahead. 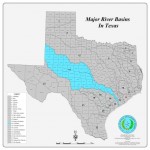 Most of our work is in the lower Colorado River Basin and along the Gulf Coast.  When the Spanish explorers arrived in Central Texas in the late 1600’s they found a huge, almost impenetrable Post Oak Savannah wilderness teeming with bears, coyotes, deer and bison which they called the Monte Grande – or “Big Thicket”. The Colorado River, almost a mile wide with sand banks and abundant in mussel shells, had water which was “the best we have found”. The unending forest of pine, live-oak and oak were so tall and thick that in some places it was difficult to see the sky. Springs were abundant and prolific providing clean, clear, pure water to streams and rivers from the abundant and huge aquifers that lay beneath the ground (1,2).  Much changed as this region was settled and human activities began changing the landscape. 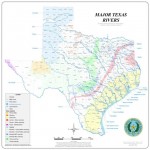 The Colorado River and the Carrizo-Wilcox Aquifers intersect in Bastrop County where they still interact with each other, though at a much reduced level than in the 1600’s.  The Colorado River still gains water from the aquifers as it passes through the region, but at a much reduced rate.  The Carrizo-Wilcox Aquifer Group has become the target of water marketers and exploitation as the Austin to San Antonio corridor continues to grow and develop, needing water to satisfy thirsty urban communities. To protect the river and its communities, it has become important to protect this groundwater-surface water relationship between the Colorado River and the Simsboro Aquifer (an aquifer in the Carrizo-Wilcox Group).