The combination of several pumping impact reports produced over the last few years are presented in a report titled “Colorado River – Simsboro Aquifer Connection.”  NOTE: See the final edited report at this link for final text, attachments, and references.

There is empirical data that indicates that there may be a significant drain of water from the Colorado River into the Simsboro Aquifer above Bastrop where the river intersects the aquifer.  According to an LCRA gain-loss study[i], the Colorado River is a “losing stream” in the segment where the river and the Simsboro aquifer intersect between Austin and Bastrop (Attachment 1).  In November 2005 the river was estimated to be losing 9 cubic feet per second, or a loss of 6,516 ac-ft per year (see Table 19-1 from the report).  Overall, the Colorado River below Austin has an estimated net gain of 145,000 to 170,000 ac-ft per year as it flows from Longhorn Dam to Matagorda Bay (error of study estimated to be +/- eight percent).  The LCRA conducted a similar[ii], but less conclusive study in November 2008 (Attachment 2).

The impact of the pumping described above, by way of the apparent direct connection between the Colorado River and the Simsboro Aquifer, could cause future losses from the river to the aquifer to be significantly greater than the current estimated loss of about 6,500 ac-ft/yr. The impact of groundwater pumping of the Simsboro Aquifer on the Colorado River is of great concern and needs to be investigated, quantified if possible, monitored and managed.

Environmental Stewardship, in connection with its efforts to inform the permitting process of the Lost Pines GCD and the desired future conditions process of Groundwater Management Area 12, contracted a groundwater hydrologist, George Rice, to evaluate the impacts of groundwater pumping on the Simsboro and associated aquifers, and on outflows from the aquifers to the Colorado River.  Environmental Stewardship hereby submits documentation[v] (Rice’s Evaluation Report) demonstrating that there is likely to be deleterious impacts on the Colorado River and its tributaries and on the aquifers associated with the Simsboro aquifer resulting from baseline pumping and baseline plus potential groundwater pumping (Attachments 3).

Impacts on aquifer outflows to the Colorado River

Rice’s Evaluation Report show that groundwater modeling predicts that there will be impacts on baseflows (aquifer outflows) to the Colorado River and tributaries from baseline and potential pumping of the Simsboro aquifer. Though modeling does not specifically predict quantity of impact on the river, it does predict a trend toward decreasing the amount of groundwater discharges to surface waters. Increased pumping rates predict less discharge to the river when pumping is increased over baseline pumping rates. The greater the pumping rate on the aquifer, the less discharge to the river.

Rice’s Evaluation Report also estimates the combined impact of baseline pumping (existing permitted pumping) and potential pumping on aquifer outflows to the Colorado River. The combination of potential pumping within the district is predicted by the GAM model to have a three-fold impact in decreasing groundwater outflows to the river and tributaries over baseline pumping (See Figure 5 from report). The model predicts a trend where the Colorado River changes from a net “gaining stream” to a net “losing stream” within the 50 year planning cycle. The model predicts that potential pumping accelerates the shift from “gaining” to “losing stream by about two decades when compared to baseline pumping. The predicted trend and the shift to a losing stream have major implications for environmental flows — both instream flows in the Colorado River and freshwater inflows to Matagorda Bay — especially during drought conditions. Again, though the model does not specifically predict quantitative impacts, the trends are clear and need to be better understood as groundwater pumping is ramped up over the next decade. 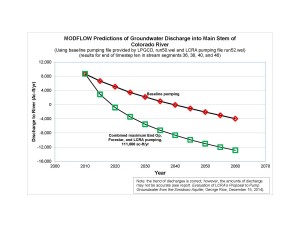 Impacts on Simsboro and associated aquifers 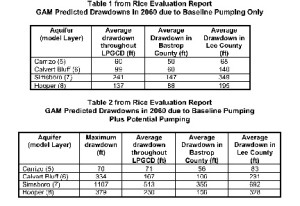 Tables 1 and 2 from Rice Report

All of the aquifers in the Carrizo-Wilcox group intersect the Colorado River between Austin and Smithville, but primarily in Bastrop County (See Table 19-1 from LCRA Report).   Since the river is a “gaining” stream in most of the segments in this region (except the Austin-Bastrop segment), it is reasonable to expect that induced leakage into the Simsboro will decrease outflows to the river throughout the county thus increasing the likelihood that these other segments will become “losing” stream segments. The dramatic increase in drawdown resulting from the potential pumping (Table 2) will likely accelerate the trend as noted with Figure 5 from the Rice report.

Historical records indicated that the Colorado River has gained water from the Carrizo-Wilcox and other aquifer formations as it passes through Bastrop and Fayette counties. Recent studiesindicate that the Colorado River is, and remains, a net gaining river as it passes through the river segment associated with the Carrizo-Wilcox aquifer group. Low-flow studies conducted by the USGS in1918, and a flow-duration curve generated by Dutton, in 2003[ix] indicate that these groundwater formations have contributed a net flow of approximately 25,000 acre-feet per year to the Colorado River.

More recently, the Lower Colorado River Authority (LCRA) conducted studies, discussed earlier, to assist in its management of water releases from the Highland Lakes to meet water rights and environmental flows obligations (LCRA Operations).  These studies include information on the gains/losses of the river as it flows through Bastrop County and provide additional quantification of the amount of base flow the river gains during drought periods like the one that has occurred over the past several years. In a study related to the LCRA Operations Project (Saunders, 2006; Reference 1) the author concluded, “the lower Colorado River is a gaining stream that receives groundwater contributions from major and minor aquifers.” Analysis of USGS data contained in the report, though inconclusive, shows a gain of about 50 cubic feet per second (cfs) in the reaches passing over the Carrizo-Wilcox between Utley and Smithville (about 99 acre-feet per day).  Limited fieldwork in 2005 also suggested that, thought the Colorado River has some stream flow gain from groundwater in these reaches, there is a losing segment in the reache associated with the Simsboro Aquifer.

The LCRA conducted a field investigation in November 2008 as a follow-up to above mentioned gain-loss studies (Saunders, 2009; Reference 2).  The study concluded “the total net gain to the Colorado River from the Carrizo-Wilcox aquifer in Bastrop County was estimated to be 30 cfs during the November 2008 low flow event.  This compares to the USGS 1918 estimate of 36 cfs, and the LCRA estimate of 50 cfs in November 2005”. Saunders further concluded “contributions to the base flow from these sources can be important during critical low-flow conditions.”  “A study of ground water-surface water interaction prepared as part of development of the Central Carrizo-Wilcox groundwater availability model indicated that base-flow rates of rivers crossing the aquifer outcrop have not decreased over time, and seasonal variability in base flow for perennial streams may not fluctuate significantly (Dutton and others, 2003).  In addition, flow from bedrock aquifers through the alluvium to the river is a complicated system and requires further data and analysis.  As demands on ground water resources increase with future growth in the Central Texas, ground water-surface water interactions may need to be periodically monitored to assess water availability in the decades to come.”

We are in danger of impacting the river system below Austin in a manner that will result in a dramatic decrease in the contribution of groundwater outflows to the river in the lower basin and inflows to Matagorda Bay. This situation will become even more critical as environmental flows to Matagorda Bay are held back by the LCRA approved Lane City Off-channel Reservoir Project. Ecologically speaking, a river is an ecological system and needs to be managed on an ecological basis to ensure that ecological service functions (such as the groundwater-surface water connection) of the river that provide flows are not severely reduced or damaged. The impact of groundwater pumping of the Simsboro Aquifer on the Colorado River is of great concern and needs to be investigated, quantified if possible, monitored and managed.

As the current drought continues, we may have a very rare opportunity to conduct gain-loss hydrologic studies on the lower Colorado River during this period of severe drought and historic low flow conditions resulting from the curtailment of irrigation water for rice farming. The information collected as part of the study could be used to assist in the calibration of groundwater availability models.

REFERENCES: (See full text of report for all references)