So, let’s talk SCIENCE for a few minutes

As recently reported, the LCRA’s application for a groundwater permit is now in the hands of the Lost Pines GCD Board of Directors. Fortunately the Administrative Law Judges (ALJs) did not substantively alter their recommendation for the inclusion of a requirement for surface water monitoring, and the District has only limited ability to alter the recommendation of the ALJs. As such, the Proposal for Decision that has been sent to the Lost Pines Board still preserves Environmental Stewardship’s win regarding the need for monitor of surface water-groundwater interactions as a special condition in the permit.

The following science discussion is provided to give a more visual understanding of what the ALJ’s saw and heard during the contested case hearing that caused them to recommend that surface water monitoring be required.

The most important discussion relate to impacts of groundwater pumping on the Colorado River was the cross examination of the District’s expert witness on groundwater hydrology and groundwater modeling — Dr. William J. Hutchison — by our counselors Eric Allmon and Marisa Perales.

Dr. Hutchison — who has had a distinguished career with Texas State Agencies — provided a report titled: Expert Report for the General Manager of the Lost Pines Groundwater Conservation District.  In producing the report Dr. Hutchison ran the updated Groundwater Availability Model (GAM) to produce the following graphic that demonstrates the impact of groundwater pumping on the Colorado River. (See Report – WILLIAM R. HUTCHISON pages 15-16 of the report and Figure 6 below with annotation by ES, click to enlarge.)

Figure 6 shows the surface water- groundwater interaction simulated by the revised GAM for river nodes located in the Colorado River Alluvium. The two pumping scenarios (red and purple) deviate in 2020 as a result of the start of LCRA’s proposed pumping. Here are the important conclusion from demonstrated by this figure:

LCRA’s groundwater hydrologist Steve Young and others characterized the reversal from a GAINING to a LOSING river as an UNREASONABLE effect of groundwater pumping on the Colorado River.

A Model is a Model … and needs to be validated with field data.

The revised GAM used to predict the impact of groundwater pumping on the river used field data to calibrate the model from 1920 through 2010. This was an important step in validating the model through that period. However, as the expert witnesses testified, the impact of high rates of groundwater pumping will likely cause the model to behave somewhat differently during the development years. As a result, there is a need to get good quality field data during the development period to validate that the model is giving predictions that are reliable enough to use as the basis for making regulatory decisions regarding future pumping.

The need for a surface water monitoring well network was demonstrated

Based on the evidence presented the ALJs agreed with Environmental Stewardship that there is a risk of unreasonable damage to the Colorado River and its tributaries AND there is a need to obtain field data to further validate the model. Further, they agreed that the LCRA must be required to design, install and operate such a surface water monitoring well system and that the requirement should be an enforceable special condition of the permit. 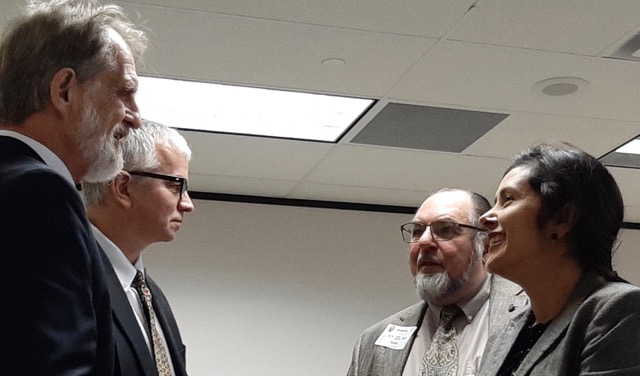 Environmental Stewardship’s groundwater hydrologist George Rice took a slightly different approach to the modeling runs he conducted.  Whereas Dr. Hutchison lumped all outflows to surface waters together and counted them as one outflow to the Colorado River, Mr. Rice separated the outflows to the main stem of the Colorado from the outflows to tributaries.   As a result he was able to demonstrate that the tributaries will be impacted by groundwater pumping of the Simsboro formation in the same way as the main stem of the Colorado is impacted — by reversing the GAINING relationship to a LOSING relationship.

The following graphs represent Mr. Rice’s findings when outflows from the aquifers are separated out for the Colorado River mainstream and the tributaries, Big Sandy, Wilbarger, Piney Creek/Lake Bastrop and Walnut/Cedar creeks: 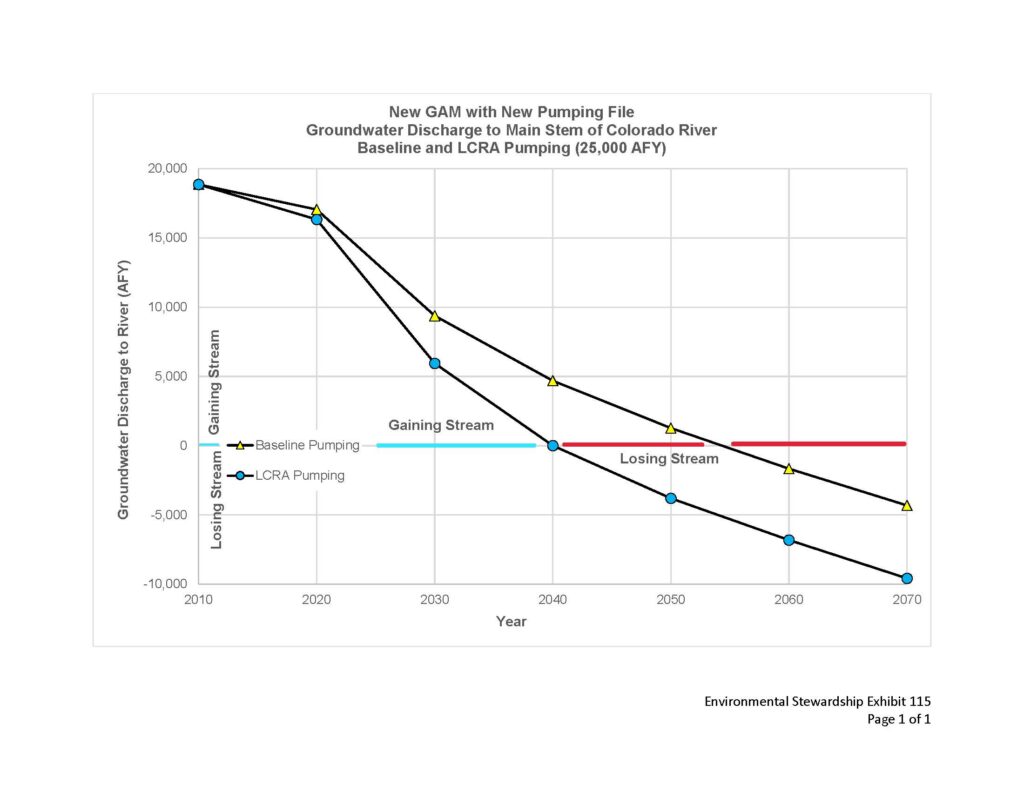 Impact of groundwater pumping on the main stem of the Colorado River predicting that it will become a LOSING river by 2040 with Baseline + LCRA pumping. 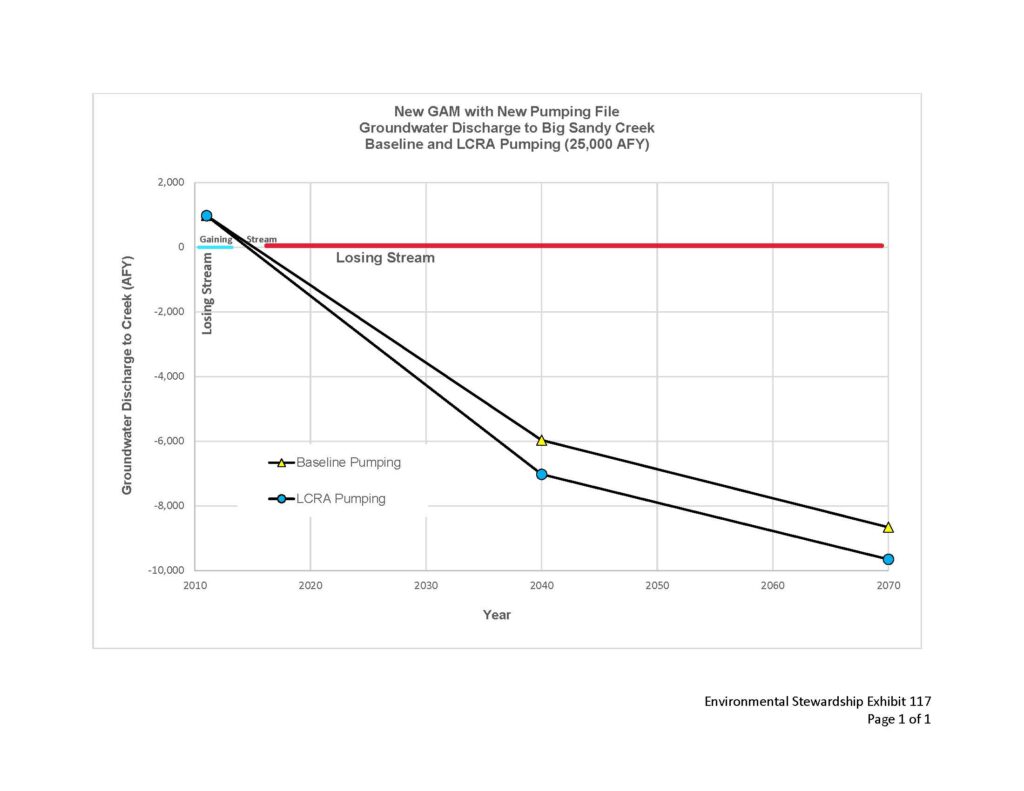 Impact of groundwater pumping on Big Sandy Creek predicting that it became a LOSING stream about 2015 with Baseline pumping. 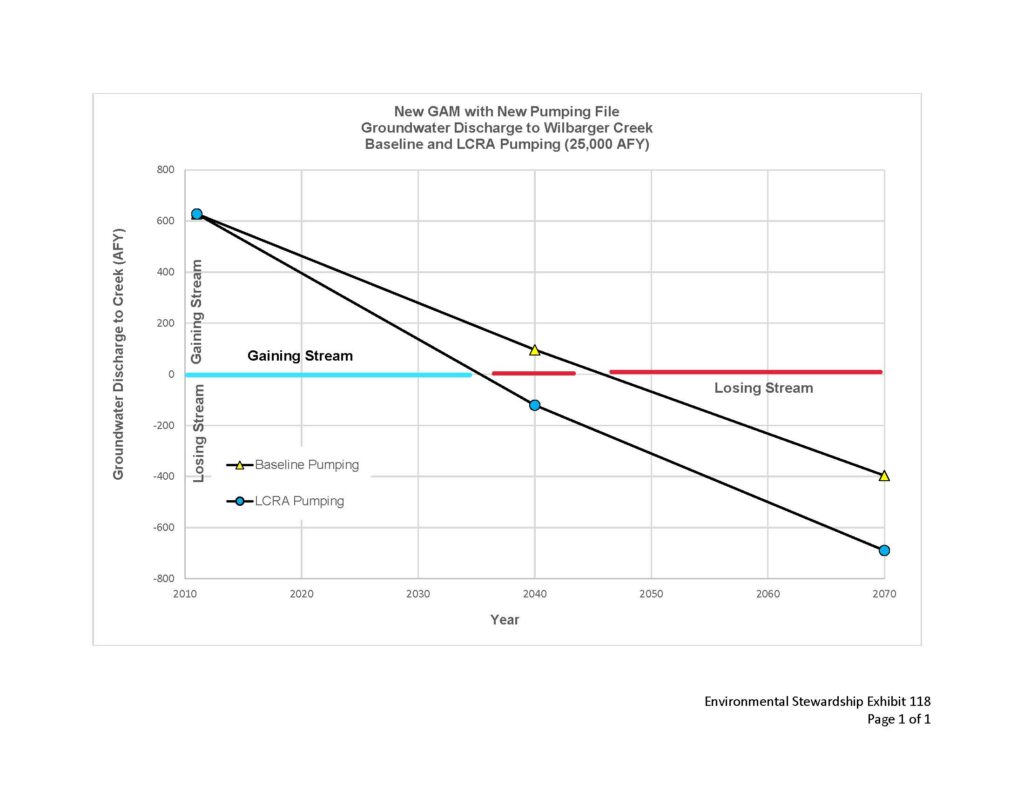 Impact of groundwater pumping on Wilbarger Creek predicting that it will become a LOSING stream by about 2035 with Baseline plus LCRA pumping. 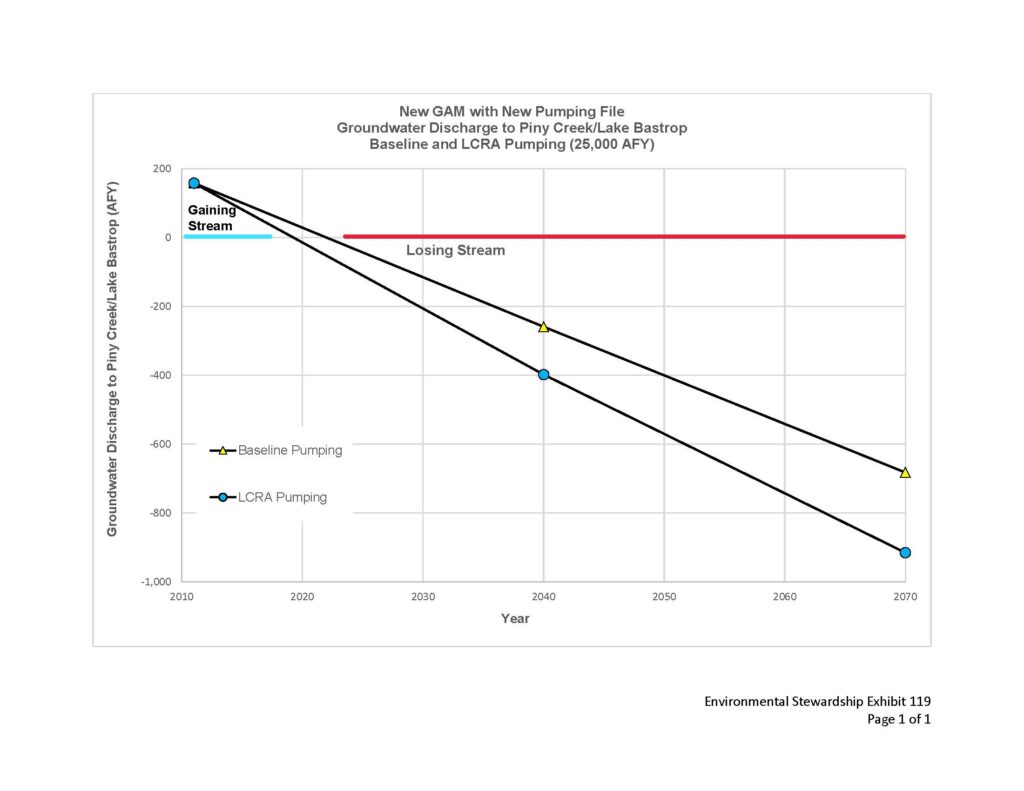 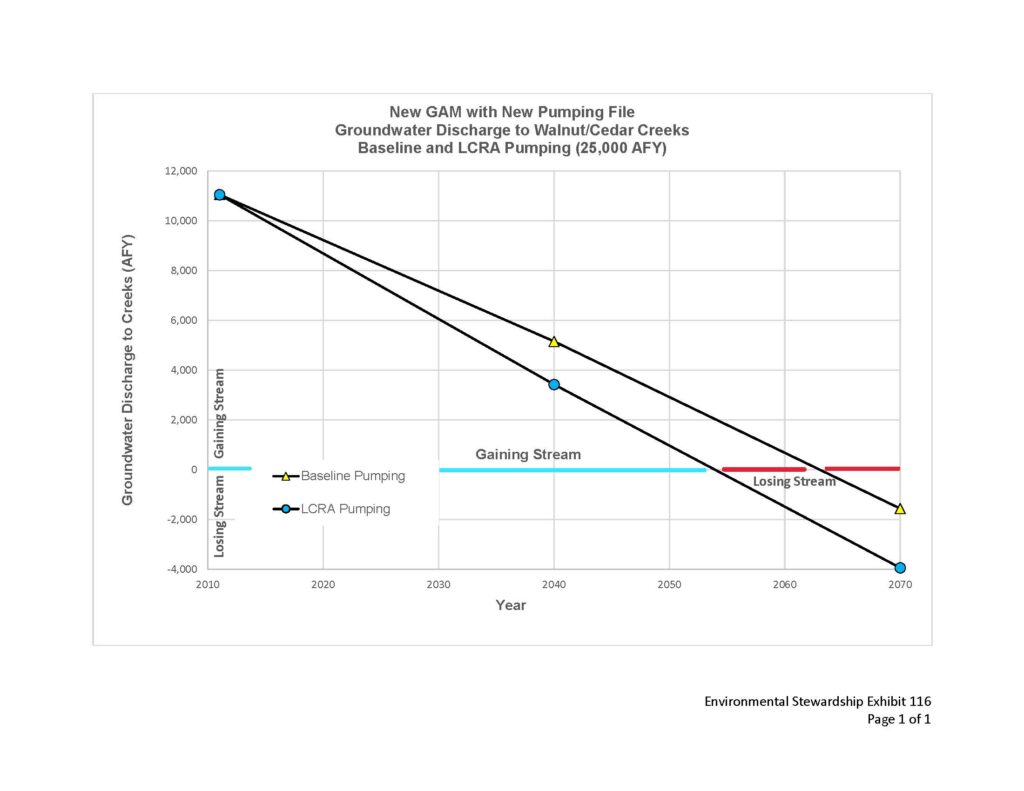 Impact of groundwater pumping on Walnut/Cedar Creeks predicting that they will become LOSING streams by about 2055 with Baseline plus LCRA pumping.

In summary, the following conclusions can be drawn from this analysis:

NOTE:  The graphs above are from Environmental Stewardship’s motion to supplement the pre-filed testimony of its expert witnesses George Rice and Joe Trungale.  LCRA objected to the supplemental testimony and the ALJ’s did not allow this material to be made part of the record.  The same graphs — based on earlier GMA-12 pumping files — were a part of the prefiled testimony.  The above graphs have been annotated by Environmental Stewardship to show 1) the pre-Development (calibration) and the Development (pumping)  periods from 1930 to 2070 in Dr. Hutchison’s Figure 6, and 2) the point in time, as outflows from the aquifer into the river and tributaries decline, when the Colorado River, Big Sandy Creek, Wilbarger Creek, Waller/Cedar Creek, and Piney Creek go from being GAINING streams to LOSING streams as a result of groundwater pumping.

Clarification:  The incremental time step between data points on the Colorado River graph is 10 years, whereas the incremental time step between data point on the stream graphs is 30 years.   Thus the stream graphs appear as “straight line” graphs.  This is important when interpreting the period between 2010 and 2030 because LCRA pumping is not predicted to start until after 2020.  As a result, though it appears that Big Sandy and Piney Creeks become losing streams as a result of LCRA pumping, in reality the change to a LOSING stream is due only to Baseline pumping.

Pumping the Simsboro formation of the Carrizo-Wilcox Aquifer Group results in drawdown of the Hooper, Calvert Bluff and Carrizo  formations and thereby directly impacts domestic well

In summary, the increased drawdown of the Hooper and Calvert Bluff formations have a direct impact on the quantity of groundwater available to outflow to surface water and the water level in domestic wells located in these formations.  As such, monitoring the drawdown in domestic wells and outflows to surface waters such as Big Sandy, Wilbarger, Piney and Cedar creeks are complementary predictors of the overall impacts of groundwater pumping on historical hydrological conditions in the Carrizo-Wilcox Aquifer Group.

Environmental Stewardship’s surface water expert witness, Joe Trungale, used the current surface water availability model (WAM) to evaluate the impact of reduced inflows to the Colorado River and its tributaries to predict changes in critical environmental flow attainment rates.  His testimony and overall conclusion are that: 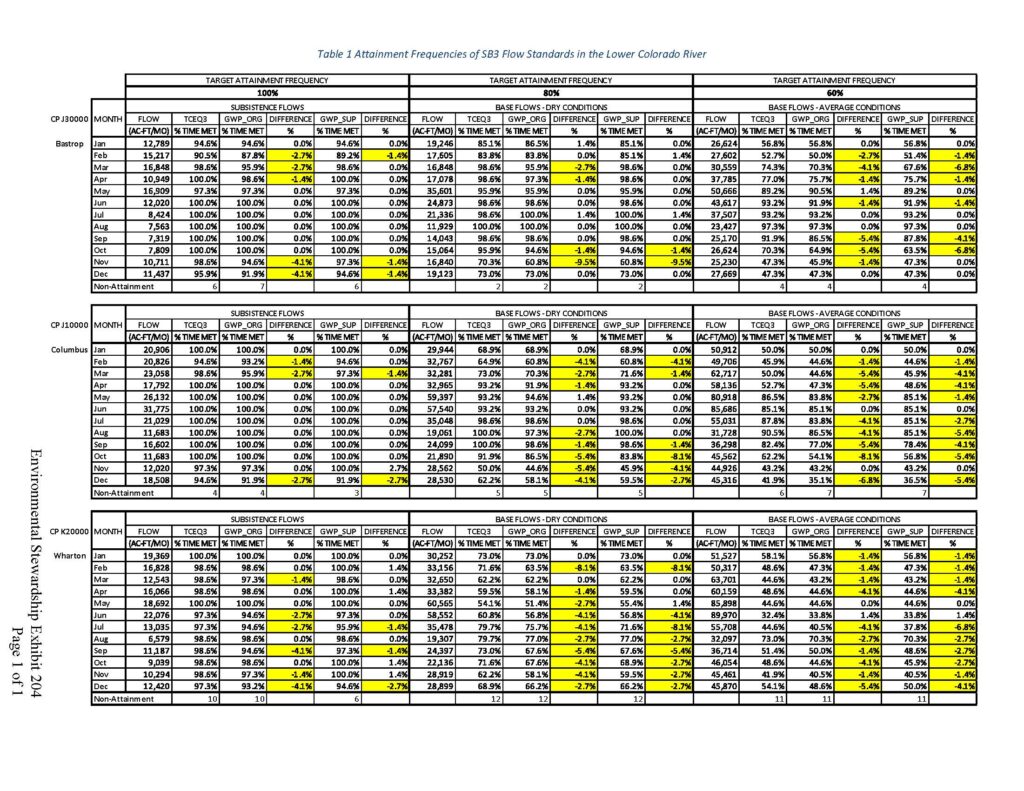