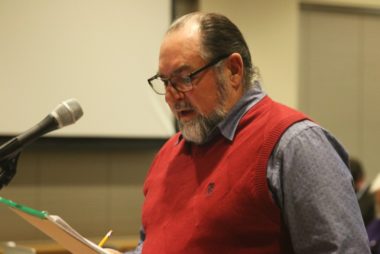 Environmental Stewardship Executive Director Steve Box on Wednesday urges the Lost Pines Groundwater Conservation District board not to appeal a court decision allowing a group of Bastrop County landowners to challenge a permit for Recharge Water to withdraw 15 billion gallons of groundwater annually from the Simsboro formation of the Carrizo-Wilcox Aquifer. MARY HUBER/BASTROP ADVERTISER

The District’s failure to move forward with a hearing in adherence to the judge’s order has left uncertainty in the District’s position, creating an opportunity for End Op to continue the litigation for now through an appeal.  As such, yesterday End Op acted on that opening and filed an appeal of the Judge’s Final Judgement in the Court of Appeals for the Third District of Texas (Austin).

The District should respect the judge’s ruling and expeditiously grant a hearing to Landowners (Plaintiffs), thereby putting an end to the District’s enabling of End Op’s recent appeal.

Sitting-on-their-hand makes the District complicit in the appeal that End Op has now filed.

To clearly move in adherence to Judge Campbell’s ruling, the District needs to take two affirmative public actions: 1) immediately direct their attorneys not to appeal, and 2) affirmatively granting a hearing on the End Op permit application that includes the Landowners as parties.

READ ON AND TAKE ACTION

Bastrop and Lee county landowners are encouraged to immediately contact the Lost Pines Groundwater Conservation District and strongly urge that the Board take immediate action to put an end to the District’s enabling of End Op’s recent appeal.