ES Urges Board to Stay the Course

We have a simple message to deliver to the Lost Pines Board tonight:

“Thank you, you are doing the right thing.  WE HAVE YOUR BACK.
STAND TALL AND STAY THE COURSE”.

Forestar Group (USA) took initial steps on June 3rd to enable it to file suit against Lost Pines Groundwater Conservation District (District) when it formally requested “Findings of Fact and Conclusions of Law” from the District (Forestar letter).  We believe that Forestar is pressuring the Board to reverse their decision and grant all 45,000 ac-ft/yr of groundwater as requested, OR BE SUED.   …

Big Money (Forestar) rolls out big guns (Lawyers) to intimidate guardians (Lost Pines GCD Board) into capitulating (giving them what the want) rather than protecting our groundwater resources. We need your help to let the Board know that they are doing the right thing in protecting our groundwater and WE HAVE THEIR BACK. Ask them to please “stand tall and stay the course”.

Plan to attend the July 17, 2013, meeting of the Lost Pines GCD Board at 7:00 pm at Bastrop City Hall, 1311 Chestunt Street, Bastrop, TX. We will be providing more information about this meeting and what you can do to support the Board.… 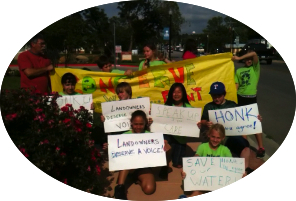 Bastrop, TX  – The people of Bastrop and Lee counties gained a MAJOR VICTORY at last night’s Lost Pines Groundwater Conservation District hearings.  The Board of Directors listened … and they acted on our behalf.

THANK YOU Lost Pines BOARD MEMBERS!
1)  LCRA’s request for 10,000 acre-feet/year was cut back 50% to 5,000 acre-feet/year except in years when the counties are in drought conditions.
2)  Forestar’s request for 45,000 acre-feet/year to export was cut back 75% to 12,000 acre-feet/year.
3)  Environmental Stewardship and a group of landowners were accepted for timely filing of their request for “party status” at the End Op contested case hearing to be held before the State Office of Administrative Hearings.
… END_OF_DOCUMENT_TOKEN_TO_BE_REPLACED
May 16, 2013StewardEnvironmental Stewardship, Groundwater, Groundwater Districts, Simsboro AquiferEnd Op, Forestar (USA) Real Estate Group, Groups United toAdvocate Responsible Development "GUARD", Independent Texans, Lost Pines Groundwater Conservation District, Lost Pines Sierra Club, Lower Colorado River Authority, Neighbors for Neighbors

Coalition Asks that Desired Future Conditions be Protected in Permits

The Forestar, End Op, and LCRA applications will harm existing permitted wells, the environment, and are far in excess of the DFC and MAG (defined below).  We, a coalition of Environmental Stewardship, Neighbors for Neighbors, Lost Pines Sierra Club, and Groups United to Advocate Responsible Development “GUARD,” believe that, if permitted at all, individual permits should first be reduced to levels actually supported by the application and then all permits reduced overall as necessary to an aggregate level that, including existing permits, protects the Adopted Desired Future Conditions.  In summary, if permitted at all, Forestar and End Op qualify for less than 5% of the water they are seeking.  In addition, the District needs to factor in the impact of existing permits before issuing any new permits. This has not been done. … END_OF_DOCUMENT_TOKEN_TO_BE_REPLACED
May 1, 2013StewardEnvironmental Stewardship, Groundwater, Groundwater Districts, Simsboro AquiferEnd Op, Forestar (USA) Real Estate Group, Groups United toAdvocate Responsible Development "GUARD", Lost Pines Groundwater Conservation District, Lost Pines Sierra Club, Lower Colorado River Authority, Neighbors for Neighbors

What does “draw-down” resulting from groundwater pumping look like on a map?  As you may know, the Desired Future Conditions are established in terms of the draw-down, in feet, of aquifers in Bastrop and Lee counties and throughout the District.

Recently, Environmental Stewardship obtained visual images based on the Groundwater Availability Model (GAM) used by the Lost Pines Groundwater Conservation District to evaluate the impact of proposed pumping from current permit applications on the Simsboro Aquifer.  Draw-down, measured in feet, is indicated on the contour lines of the maps below.

Will Lost Pines GCD Follow or Skirt the Law in their Permitting Process?

This is INSANE.   Lost Pines GCD is on the verge of permitting five and a half (5.6) times more water from the Simsboro aquifer than is available.  The total amount of Modeled Available Groundwater (MAG) from the Simsboro Aquifer by 2010 is 29,556 acre-feet/year per the Lost Pines Management Plan.  Lost Pines is currently considering permit applications for 119,199 acre-feet/yr which is 4 times more water than is available for pumping.  Adding the current 45,365 acre-feet/year already permitted brings the total to 164,884 acre-feet/yr which is 5.6 times the amount of water currently available (without considering Environmental Stewardship’s ecological concerns).  So far, the General Manager has recommended approval of ALL the applications that have been presented to the Board of Directors. See Permit Concerns for copies of GM Recommendations.

will VOTE on the following applications at their next Board Meeting

Alcoa applies for 25,000 acre-feet of groundwater per year 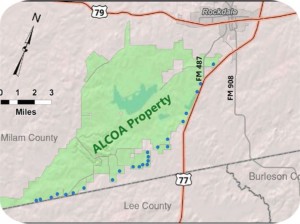 NOTICE OF A PUBLIC HEARING

Citing concerns expressed by local landowners concerning the recent notices issued by ALCOA, ALCOA today requested that the hearings scheduled by the District, to consider applications filed by ALCOA on March 13, 2012, be re-scheduled for a later date.

Originally, the District had set these hearings for August 14, 2012, 5:30 pm, at the District’s offices. It is anticipated that new notices in local newspapers and to landowners will be issued in time for hearings to be held on these applications at the regular Board of Director’s meeting of September 11, 2012. It is further anticipated that these re-scheduled hearings will be held at the Milano Civic Center, 120 West Ave. E, Milano, TX. Please see actual notices, for actual locations, dates, and times.

The Board of Directors of the Post Oak Savannah Groundwater Conservation District will hold a public hearing on Tuesday, September 11, 2012, at 5:30 P.M., for the purpose of receiving public comments on the following applications for amendments to existing permits.  If you have a well or spring near the Alcoa site you are encouraged to attend. Click here for copy of hearing notice.