Groundwater pumping in the Simsboro formation of the Carrizo-Wilcox aquifer group affects the Colorado River and its tributaries, the Carrizo, Calvert Bluff and Hooper formations, other aquifers, and landowners’ domestic wells. 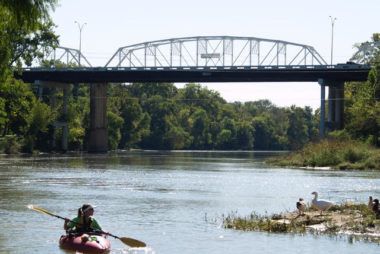 Environmental Stewardship has been working with George Rice, our groundwater hydrologist, for many years to develop the scientific information to demonstrate the impacts of groundwater pumping.  Pumping by the many permitted wells in Bastrop, Lee, Milam and Burleson counties are predicted to affect flow in the Colorado River and its tributaries, water levels in the formations within Carrizo-Wilcox aquifer (Carrizo, Calvert Bluff, Simsboro and Hooper formations) other aquifers such as the Sparta and Queen City, and domestic wells owned by landowners.

A major accomplishment in this effort has been to get the groundwater availability model (known as the GAM) for our region upgraded to be more reliable in predicting the impacts of groundwater pumping on the aquifers and the river system.   Using the New GAM we now have the “best science currently available”. ES has advocated for the New GAM to be used in this hearing.

Using the New GAM has not been an easy task because it is fundamentally a very different model.   Mr. Rice has spent many hours over the last several months working with the new model and testing it to see how it compares to the Old GAM.   Sure enough it gives some different results — but the trends are very much the same as what were predicted by the old model. Now we have a more reliable model that makes more reliable predictions than the old model.

Models are also available for surface waters.   These models — called Water Availability Models (WAM) — are primarily used to allocate and manage surface water rights to companies and individuals.  WAMs are developed and managed by the Texas Commission for Environmental Quality (TCEQ).

Environmental Stewardship has been working with Joe Trungale, a surface water hydrologist, to use the WAM to predict the impact of removing groundwater from the Bastrop reach of the Colorado River.   Using the most up-to-date model available, Mr. Trungale has used estimates of the reduction in groundwater to investigate the impacts on environmental flows in the river and on inflows to Matagorda Bay.

Environmental flows are statutorily defined flow regimes for the river, called instream flows, and freshwater inflows into the bay.  These standards describe the amount of flow needed in the river and bay during high, average, dry and drought conditions to maintain the biological soundness of the state’s rivers, lakes, bays and estuaries.  To the extent practicable, the legislature has required the balancing of all other public interest to consider and provide freshwater inflows and instream flows necessary to maintain the viability of state waters.

Under the TCEQ’s water allocation process the water in the Colorado River at Bastrop and below has been fully appropriated.  As such there is essentially no surface water available to spare.

Any decrease in stream flow from groundwater pumping would likely come at the expense of existing water rights holders and would have adverse effects on flows needed to maintain a sound ecological environment.   A sound ecological environment is defined as “a functioning ecosystem characterized by intact, natural processes, resilience, and a balanced, integrated, and adaptive community of organisms comparable to that of the natural habitat of the region”.

Reduced stream flow in the river will further impact the amount of freshwater inflows to Matagorda Bay.  Such inflows to the bay are already below recommended levels and any further reductions would only exacerbate the problem that already exists.

Environmental Stewardship, through our expert witnesses and legal team has presented evidence of the impacts discussed above in prefiled testimony. Our legal team will lay out our case regarding these impacts at the hearing being held in Bastrop on October 15-18 and 21-22 10:00 AM.   You are invited to attend the hearing and read the testimony in advance if you wish.

We are very grateful to the Jacob and Terese Hershey Foundation, the Trull Foundation, Environmental Fund of Texas, First National Bank of Bastrop, and the many individual that have made grants and donations to Environmental Stewardship to support this effort.

To all of you, thank you for your interest and support.   I hope to see many of you at the hearing.

Board President and Executive Director